Getting 'Tooned Back In.

With the knowledge that I no longer have a steady readership, but that my family and friends do still use this space to keep up with my life, I wanted to make sure y’all knew I am not neglecting you — simply trying to keep my feet under me and on the ground as we run this last leg of our time in Japan.  So let me vomit out some quick updates for y’all. 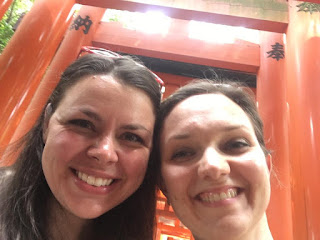 The Mister and I had a friend of his visit from the states this past week.  And in a monumental surprise, The Mister coordinated with BFFJ to have her join us for that visit as well!  Somewhere on The Mister’s phone is a video of me at the airport grumpily asking him why on earth he would be video recording me when we were waiting on his friend and then I saw BFFJ and got all blubbery so I won’t be sharing that snotty, joyful mess on the internet, but I will share a photo to prove that BFFJ was here and that she was so kind as to take while we trekked ALL OVER Japan.
Literally, all over Japan.  I’m exhausted.  How The Mister went back to work again this morning is beyond me.

We’ve finally begun to firm up some details about when The Mister’s company will send us home stateside.  We’ve still got a few things to work out on the homestead front before I can give out real dates, but it’s getting closer and closer and I’m getting excited about home.
Mac has had a few sincere lumps that have made him start to look a bit like Igor.  To be clear, they’re not bothering him, they just look unsightly.  Lumps are a common thing in dober-breeds, and Mac has had a few removed in the past, but that never makes the discovery of new lumps any less concerning.  Particularly when the vet here so kindly explained that they could test the growths (he has 4), but if the results are not good, he’s simply too big for their facilities to offer any treatment options.

Thankfully for us then, they’re all currently benign.  (There’s one on his tummy that they couldn’t get 100% confident results on, but it’s not growing quickly, so it should be okay until we get him home to big-dog vets).  Whew.

Bubs is good, though with the last few vacations he has hit his limit for wanting to spend time at the pet hotel.  Last time I went in to pick him up, the lady who runs the hotel drew a little kitty face on a dry erase board and then added angry eyebrows and teeth to indicate that Bubs had been a less than kindly guest.  But he forgave me my sins by the time we got home and I gave him some sushi-seaweed and let him bask in some porch sunlight.  Hopefully he chills out a bit before our next planned trip in August.
I’ve continued, in between all these things, to plunk away at learning animation.  Friends and family, I’ma share this here so you know that I’m still working at my animation aspirations, but I want to be straight forward that I have gotten into a REAL NICHE of animation on the you tubes, and it might not be your jam, and that’s a-okay, but I’d appreciate if you don’t just maybe keep that to yourself at the moment.
If you don’t like the content, just appreciate the fact that I drew every one of those frames by hand from scratch.  And then I went back through each frame and cleaned up the outlines.  And then I went through each of those frames again to color them.

You see, on the you tubes (yes I know that’s a stupid name for YouTube, I’m pretending to be old and out of touch for comedic effect), there is a genre of videos called “let’s plays.”  For the un-indoctrinated, these are videos of people playing video games and commenting over the top of them.  They remind me a lot of when I was a kid and you’d go to your friends house to play Mario but they only had one controller so you just chatted and because of that I sincerely love them.  The Mister does not share this love, and I get that.  But for the past few months, I’ve spent a lot of time letting playlists from a group called the Game Grumps chatter away in the background of my life while I go about life at home.  And the Grumps have started a whole new genre of videos where animators take the audio from their videos and make little cartoons out of the jokes they tell.  Turns out that’s a lot more fun to me than the little exercises I was using to learn.  SO.

I originally started posting little blips of animation exercises which you can watch on this playlist:
https://www.youtube.com/playlist?list=PLvV_6QqHnISiRYmAA1p3_7T8mVTAqiQlg

And now I’ve got a few videos of animated Let’s Plays that you can check out at the links below (fyi there are like 1 or 2 swears in each of these if you have to protect your ears from such things):

Aaaaand I’m working on more because I find it way fun to listen to a dialogue in one context and sort of twist it to make it a funny toon.

On that note, I’ve got some background panels to work out.  So I’m off!
What have you been up to?
How are your babies?
Your teams?
Your jobs?
Your weather?
(ours is getting back to armpit humidity level… yay?)
Tell me in the comments!
Posted by Kp at 11:38 PM