Thanks for your patience, all.  I enjoyed a lovely birthday blog break.

So since we last met…

Kp2 and I had a silly birthday party, complete with piñata, tabehoudai*, and CAKE.  Mostly it was a nice chance to catch up with our friends.  I also made Kp2 and I birthday sashes, which are popular here in the same way that a fake veil would be popular for a bachelorette party in the states.  Before the party, I brought the blank sashes to my Japanese lesson and asked my teacher what would be the most appropriate thing to write on them.  I assumed she would direct me to write something prim and proper like “best birthday wises” but instead, with a devilish glint in her eye, my teacher instructed me to scrawl “Omedetou Obaasan, Banzai!” on each sash.  Which effectively translates to “Congrats Old Lady!”  Ha.  Good job, Sensei. 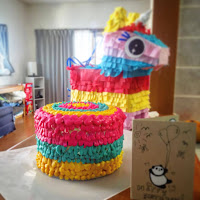 *tabehoudai: a style of Japanese restaurant where you pay a flat fee upon entry and then have 2 hours to eat and drink as much as you can.  (aka: “All you can eat.”)  Sometimes also referred to as a nomihoudai, or “all you can drink.”  We did both, no worries.

After that The Mister and I packed up and went out to the Navy Base in Yokosuka for a bit.  He had some work to take care of out there (and a promotion, what what!).  I just wanted to get out of the Nagoya Humidity (and buy a bunch of American strength cleaning supplies at the commissary).
Usually we take the Shinkansen (bullet train) out to Yokosuka when there is navy business to attend, but this time The Mister decided he wanted to drive.  Notable as it is about an hour and a half to take a train out to the base… but a SIX (6!) hour drive!  Still, it wasn’t like, the most unpleasant thing I’ve ever done, guys.  Japan does road travel in style.

I’m used to road trips where you buckle in and you start driving and you don’t stop until you get there or you run out of gas.  If someone in your driving party is stupid enough to have had a glass of water at some point, and insists that the car make an additional stop (UGH), then you will be treated to a rest area that might *look* nice, but the smell of old urine that hits you as soon as you get out of the car lets you know you’re really making a throw of the dice at when it’s been last cleaned.

In Japan, it is strongly recommended that drivers take a break once every two hours at least.  And when I say “strongly recommended,” I mean that our car’s navigational system actually chimed in at two hours and said “It’s been about two hours since you started driving.  Why don’t you take a break?”  Obviously, this isn’t something we were expecting to happen, so gold star to The Mister for not panicking at the strange voice in the car and swerving off the side of the highway into oblivion the first time it happened.

The first time we pulled over, we chose a rest stop near Mt. Fuji.  Unfortunately Fuji-sama (how Japanese folk address the mountain) was hiding in the fog this particular day… sorry for the crap picture.  But there were these little fuji-shaped cakes at the store there, so we can pretend.

Okay but the rest stops?  Amazing.  We ended up stopping multiple times on the way out and the way back from the base, and every single rest stop put American rest areas to horrible shame.

The rest stops were all incredibly spacious and well organized.  Each stop had a row of restaurants, small gift shop(s), gas station, all the vending machines ever, immense parking, and giant rest rooms.  Most of them even had a well maintained dog-run area.  So… we all know what happens next time we have reason to drive out to the base.
The organization of these rest areas was awesome.  As we pulled in, we were directed by maps of the parking areas that had lights to indicate which lots had available parking spaces.  This is fairly common in Japan, so not surprising.  But what if I told you they also had maps like that… for the restrooms? 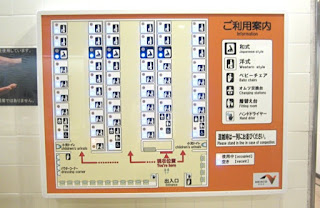 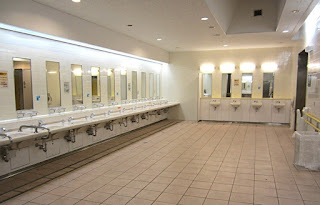 Yes.  Little green lights on the sign indicated which toilets were open, what kind of toilets they were (squat toilet vs. BIDET… who picks the squat when bidet is an option!?), and which sinks were available.  Every time we stopped there was at least one restroom attendant keeping everything clean and toilet paper stocked, while scented diffusers and fresh flowers (I mean, seriously) that kept the place smelling pleasant even though there were literally 100+ toilets all smashed into the same area.

Really the moral of the story is that you think you’re going to go on a wonderful adventure and see such awe inspiring things but then Mt. Fuji decided to hide behind a bank of clouds and so you find yourself gushing about public toilets on the internet instead.

What was the coolest thing about your last road trip?
Can YOU beat a bidet map?
Tell me in the comments!