When you’ve been in Japan long enough, I would wager even if you’re not actively trying to learn the language, you pick up a few phrases here and there.  “Arigatou.” “Sumimasen.”  “Daijoubu!”
(that’s “Thanks.” "Excuse me." and “Ok." respectively, for my peeps back stateside)

And you probably use those words, on a not-entirely-conscious level with your friends and acquaintances.  I know we (meaning The Mister and I) definitely use a few Japanese words commonly when we’re chatting with any of The Australians™ and they do the same back with us.  It’s sort of a fun way to have a “secret code” that is not secret to anyone.

The fun part comes when you begin to use those phrases in text messages.  Why?  Because we are too lazy to switch our texting keyboards over to the Japanese character keyboard for just one word, so we’ll spell ‘em out phonetically in roman alphabet characters.  Which means the best thing happens:

That above sentence is so laced with sarcasm it’s an entire doily collection.  Auto correct is not the best.  I hate auto-correct so, so much.  But when it’s Japanese words, the auto corrects can be amazing.  And so here are my top five favorite things which Auto Correct has sent to my friends in replace of words that are even slightly sensical.* 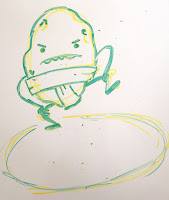 what it means: すみません  Excuse me
what auto correct thinks it means: Sumo Mash

2. Doko desu ka?
what it means: Where are you?
what auto correct thinks it means: Dodo deus k’s? 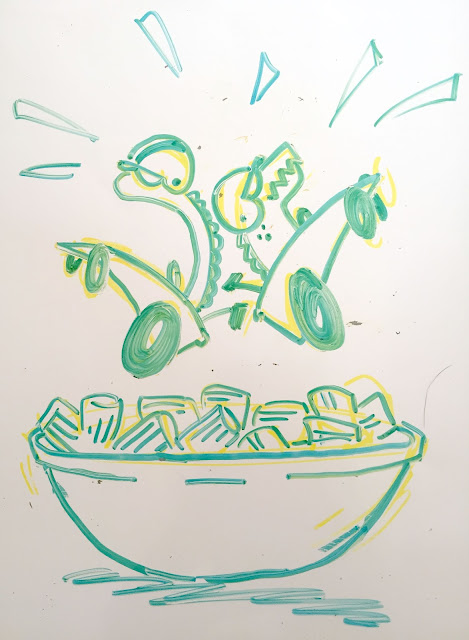 What’s your best Auto Correct?
Tell me in the comments!

*Sadly, I “added words” to my phone's “dictionary" as I’ve been here, and now the only one that still works is Dino Rigatoni Go Carts, because I’d finally figured out that these Auto Corrects were too great to demolish.

I have a weird guilt thing going on lately: I’ve been in Japan for over a year and a half and somehow I am not 100% fluent in Japanese.

That sentence is about half joking.  I have seen native Japanese speakers take out their pocket dictionaries to look up words or kanji that THEY don’t know in their own language, so I am comfortable in the knowledge that the is no such thing as 100% fluent. I do sometimes feel like I should just be… BETTER at this than where I am.

I can manage the life basics: I am conversationally proficient in getting groceries, navigating to places, ordering at restaurants, and talking to people on the street about the giant dog at the end of my leash.  But because that covers about 90% of my life here, I haven’t pushed beyond that.  I’ve been sort of stagnating at that level for longer than I’m comfortable with.

I study at least an hour a day, but recently my anxiety has been rearing it’s ugly little head every second I’m not parked in front of my notebooks with a highlighter, sneering in an ugly little voice;
“why aren’t you studying right now?”

I mean, I needed to do laundry so we have clean clothes to we-“but you could be studying.”
Yeah, I just needed to get dinner toget-“it’s your fault you’re not fluent”
Sure, except if I don’t walk Mac he’ll go craz-“this is why we can’t have nice things!” 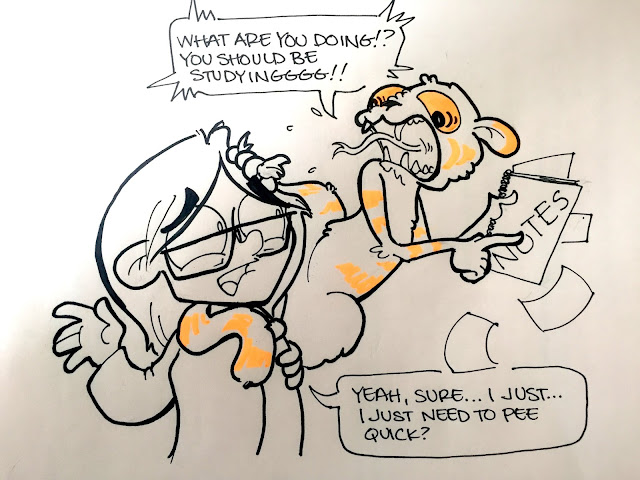 This feeling is worse when I’m doing things which aren’t vital chores.  Like say, doodling silly comics about my anxiety, or painting my finger nails.

My current solution to curb the anxious little monster on my back is to make a point of turning Japanese subtitles on while watching Netflix for "reading practice” (which I admittedly mostly ignore).

OR, better actual solution, watching Japanese television shows, to practice my listening skills.  If’n you have access to Netflix and want to also pretend you’re being productive in learning Japanese as you indulge some silly media… allow me to share my current faves.

Easily the most popular kid’s show in Japan right now, Yokai watch is like… pokemon, but with ghosts.  Watch out, America, my understanding is that it’s coming to the US soon, and it’s gonna be big.  There are no English subtitles on the Japanese netflix seasons of Yokai Watch, but the plots are easy enough to follow along without needing to read.
Basically this kid, Keta, has a watch which allows him to communicate with ghosts, and once he’s befriended a ghost, the watch allows him to call upon them for help in his every day life. 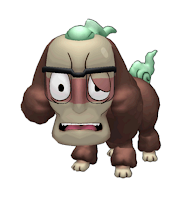 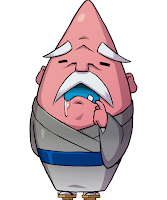 It’s interesting because many of the ghosts have back stories about how they came to BE ghosts, which alternate between weirdly hilarious - like the business man who was fired, got drunk and on his walk home was crushed by falling construction equipment… along with a small stray dog who was just in the wrong place at the wrong time… so his ghost is basically a toy poodle with a creepy adult man’s face.  It can also be “oh wow that actually made me cry” emotional - like the grandfather ghost who waits outside a convenience store every day to see his granddaughter, who he misses and was very close with in life… until he realizes that she still carries a trinket around that he gave her and comes to be at peace knowing she misses him too.  Some of the episodes get understandably real childish, like the one where the big problem was a ghost that made everyone he affected have to fart, but I’ve also learned a few fun phrases, so I’ve stuck with it.

My cousin actually turned me onto this show when she found it on her American Netflix!  I… am weirdly addicted to hating this show?
Terrace House is a long running show that recently partnered with Netflix.  The premise is a little bit Real World, with six strangers, all picked to live in together, and a little bit traditional Japanese panel commentary style, aka an actual panel of (sometimes funny) commentators who watch the show along with you and pop in every few minutes to share their thoughts on how things are going.  And the rest of it is a REAL interesting look into Japanese relationships and courtship.  By which I mean these people are in this house with the express purpose of finding love, and it takes 10 (TEN!) full episodes into the series before of them even kiss.
I’m in a love-hate thing with terrace house because the pacing is (as described above) painfully slow for my American sensibilities.  But I love it for when the one random guy in the house who happens to have grown up in the US (Arman, if you’re also a TH fan), holds his dates' hand, and then I laugh for YEARS at how shocked and offended the entire commentary panel is with how brazen he is and how quickly he moves.


Silver spoon follows an upperclass rich kid who -for some reason that’s not yet explained- decides to go to an agricultural high school instead of a yuppy preparatory school. The show follows his trials and tribulations as he makes friends by melding his city-slicker sensibilities with his growing farm skills.  There’s not much more to say about that.  I heart when he’s introduced to the piglets and his classmates immediately tell him “these are food, do not name them.” and he takes approximately three seconds to pause before proclaiming his piglet’s name:  Porkbowl. 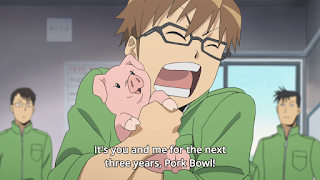 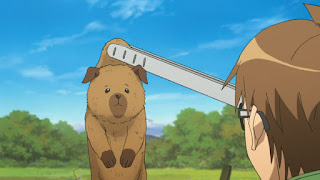 I also love the stray puppy they find and name class vice president.  I watch this for the cute anime critters is what I’m saying.

By FAR my favorite Japanese show I’ve found, The Devil is a Part-Timer is exactly what it sounds like and I need you to go watch it right now because it is absurd and amazing.  The Devil gets kicked out of the immortal realm and decides that his best path to power in current corporate Japan is to work his way up the McDonalds management chain.  Meanwhile there is an Angel sent to destroy him who gets a part time job as a cell phone sales rep to make ends meet while they hunt each other.  It’s just hilarious. 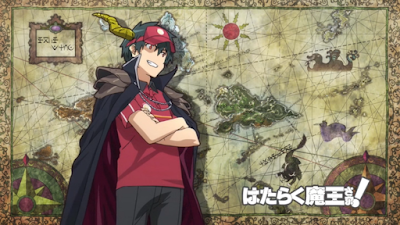 And now, quite frankly, I’ve taken a long enough break from the books to write this up - back to studying!

Do you watch any fun Japanese shows
I should check out (on Netflix preferably)?
Tell me in the comments!

today’s little language lesson
七月の休日の第四のためにアメリカの食品を買いましたか？
nanagatsu no kyuujitsu no daishi no tame ni Amerika no shokuhin o kaimashita ka?
Did you buy American foods for the 4th of July holiday? 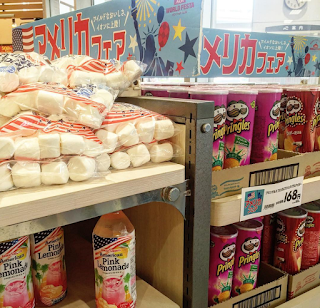 We Need a Bigger Couch.

I originally started out to write about Japanese TV and movies I’ve been watching, but this tirade about the couch just… grew. I’m having one of those “missing home/ grumbly with Japan” weeks, so you’ll have to excuse the non-Japanesey topic.

As Americans, The Mister and I, we have American sized booties.  (To be very, very clear, I greatly enjoy The Mister’s booty.  It is a quality booty.  I am pleased with the size of said booty.)  These booties of ours *technically* fit on the TJC™, though not in a way which people would call “comfortable.” 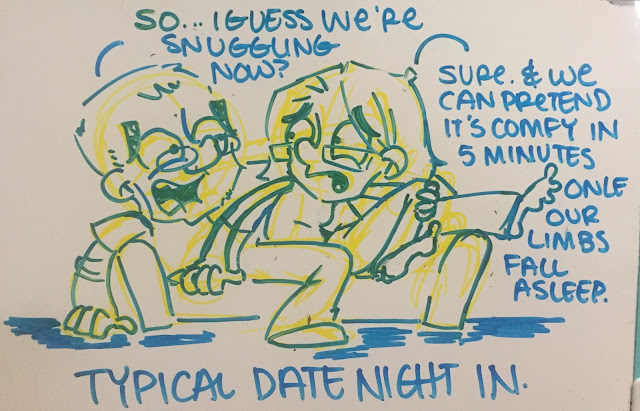 Unfortunately, this TJC™ is part of the relocation package provided to us by The Mister’s company.  It is considered a "leased piece."  As such, we do not own it, and thus even though we greatly dislike it now* -and it will be trashed when we leave- we are sort of committed to just sucking it up until the end of our time here in Japan.

If we went out and bought a new couch, it would be a cost out of our own pockets, and we’d have to figure out where to put the TJC™, and we’d have to get one which can physically fit into the elevator of our apartment/ through our apartment door (so it could not as big as we’d like), and then we’d have to deal with either getting rid of it when we go back to the states, OR we’ll have to ship it home and figure out where it’s going to fit in our house where a wonderful couch already exists.  Far, far too much hassle.

Even when The Mister isn’t home to share a couch with me, I there is one other sizable tookus in the McD household and it gets real exhausting playing the “steal each other’s couch spot game” with a mutt. 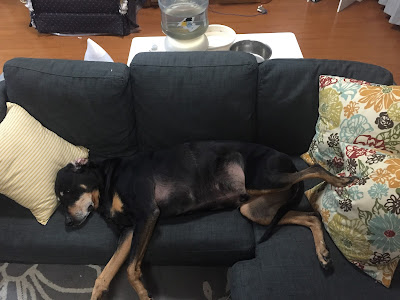 Get up to pee, lose your seat IMMEDIATELY.

In fact, I got so sick of my dog’s inability to share the couch** a few weeks ago that I bought nice, cushy, yellow pillow for the floor so I can forfeit the couch fight and just sit in front of the darn thing.  Approximately 3 hours after I got it home,  this happened for the first time:
*we actually picked it out thinking it would be good. And it seemed nice for the first few months, and then we realized it’s basically the furniture equivalent quality of a McDonald’s happy meal when you were really expecting at least like a Texas Roadhouse steak. 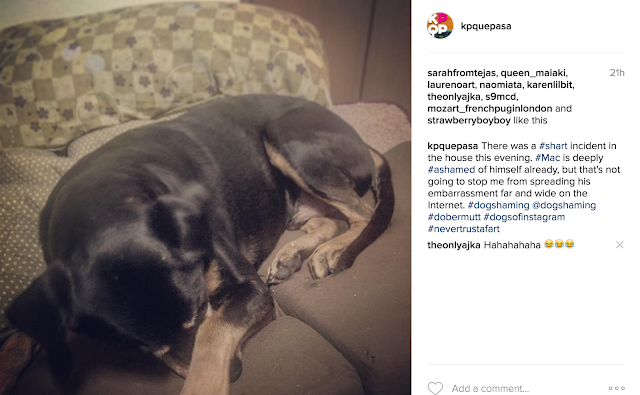 TLDR summary of the TJC™:  UGHHH.

Have you had those “I’m cranky with not being home” times?
What do you miss that some might think strange?
Tell me in the comments!