Bearing Down for the Holidays

I have finished hibernating, which means it's just about time to get on a plane to the States.
(this also means no blogging until I return late-January.  Never fear, I shall return, and share all the doodles that are sure to crop up.)

As you may remember, The Mister has been in the States for the last two weeks for Navy schtuff - I have been holding down the fort here in Nagoya.  He's flying back here this weekend... just in time to get on a plane with me which will head BACK to the states.  It's a weird long story and I'm sorry he's about to spend so much time in the air, but I am excited to see him.

I'm also excited for him to see his Christmas gift because I finished it yesterday and it's stupendous... and also because since I'm about to type about it I can't post this blog entry until he opens it!

I made him... a Kigurumi.
You may remember from previous entries here that I have a long-standing obsession with a Japanese fashion phenomenon known as the Kigurumi.  For the uninitiated; a Kigurumi is an adult onesie which makes the wearer resemble adorable popular cartoon characters or animals.  They are everywhere here, but what I was finding were all cartoon characters and I rather soundly had my mind set on a giraffe onesie.  A Kigurumi should represent your essence, your spirit, your patronus.  It should be... your spirit animal.  So I certainly couldn't just settle on a Winnie the Pooh onesie as my first foray into onesiedom.  I am set rather firmly on a giraffe. 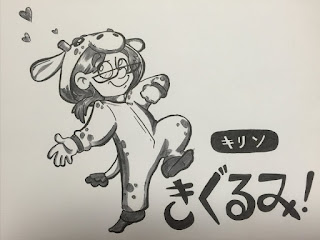 A few months back, Kp2 and I resolved to either find proper onesies or make our own.  Somehow we stumbled upon an H&M that was selling Halloween onesies, and we snapped at the opportunity.She snagged a unicorn for herself and a panda bear for her S.O.  I got the remaining design; the shark.

And all was well in the world, except... for a few key points:

Naturally then, I needed to fix these issues... and I when I found a decent fabric store in this town... y'all it was on like Donkey Kong.

The Mister left for his navy responsibilities and I got to work:  I purchased a copious amount of yellow sweatshirt fabric, a zipper and thread, and some elasticized dark gray fabric for sleeve and leg cuffs.  I came home and worked out a reasonable pattern for a basic onesie, and I sewed it up.  And I knew I had hit pay dirt.  I had decided to make my own first just in case I needed to do a lot of tweaking - that way it would be perfected for the one I made for The Mister.  After some trial and error I got some spots on the darn thing and now I'm pretty sure I'm never taking it off.  This is my true form.

Now... the all important question: what animal to make for The Mister?
I thought, what an easy question this will be to ask.  And I was SO WRONG!

He took over two weeks dodging the answer to this seemingly simple thing to identify.  Including one very amazing side conversation between the time where he identified himself as a bear but before he was able to pinpoint what type of bear where I made a joke about the terminology used in GLBT language wherein the term "Bear" is used as a way to identify hairy gay men.  The Mister apparently didn't catch this joke.  Additionally, "Bear" is also apparently a popular search term to identify the same type of man in porn... and if you don't have your google safe search turned on you can apparently get some pretty questionable search results.  Particularly if you're The Mister and you're at work when you're trying to appease your pestering wife's weird texts by finding a "what type of Bear am I?" quiz and then you get to spend the rest of the day hoping you didn't trigger one of your employer's HR internet flags.

Long story short - now there is a bear onesie with plaid lined hood and pockets.  It has paw-mittens attached and a bear nose and by God I almost had a moment where I debated switching my onesie out with The Mister's.


And by golly, he's a-damn-dorable in it. 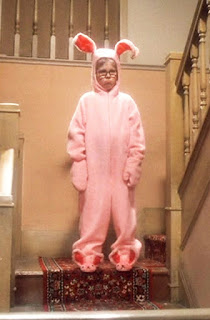 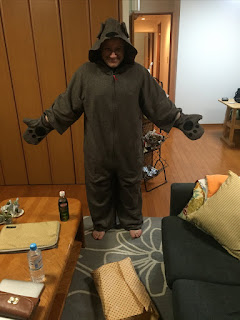 Do you do silly Christmas presents?
This is our first go at it and we're digging it - a lot less stress about finding the perfect thing, you know?
Tell me about your gift giving scheme in the comments! 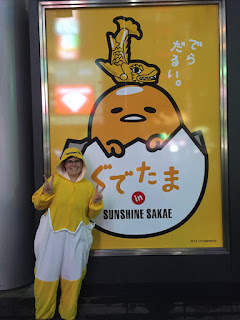 From under my rock

All is well in the world, just a lot of world to keep track of. 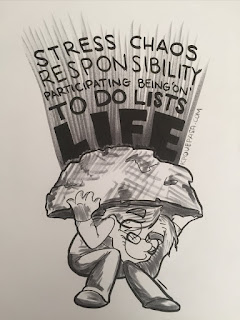 This time of year is always hectic, and it always seems to leave me feeling a constant level of overwhelmed.

This year, however, I've been given a gift that few people would cherish the way I do:  I've been given hermit time.  The Mister has taken off for some navy responsibilities over the next two weeks, and I'm using this time to really take the time to hunker down in the apartment by myself, take care of myself and make sure my charge meter is back at 100% before we take off for the holiday smorgasbord of travel.

This is not to say I don't like being around people; I really love being with friends and family (more on that in a second).  When I'm with others though, it feels as if I'm a human iphone:  I'm super fun and I genuinely enjoy being a part of the [candy-crush] party... but I can only go so long before I need to be left be to plug in and recharge.  So that's what I'm doing.  Long story short; you'll excuse me if I'm not particularly verbose today, but I have a moisturizing hand mask to apply today.*  Important stuff.

Since I don't have much to share, let's just go with some pictures and call it good. :) 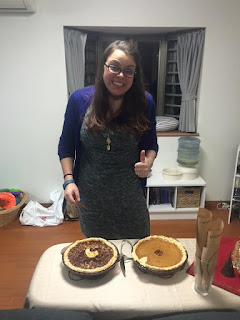 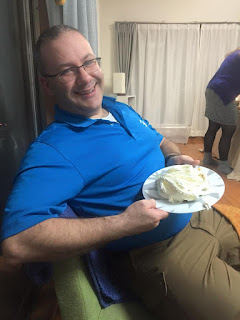 We hosted a Thanksgiving dinner with our Aussie friends.  It was a great time, I managed to put together a proper spread using only the magic of a crock pot and a microwave oven we had: spinach artichoke dip, ham roll ups, dried apple slices, stuffing, mashed potatoes, a whole chicken, cranberry sauce, dinner rolls, gravy, pumpkin pie, and pecan pie.  The chicken got tricky (I should have done just pieces of chicken instead of trying to time out cooking a whole bird to coincide with the rest of the meal), and the pumpkin pie wasn't as sweet as I'd have liked (Japanese pumpkins aren't as sweet as the pie pumpkins sold int he states, so my recipe was skewed), but both of those are factors of life here that I can correct for next year.  In any case, the pies went over well because even if it wasn't sweet enough, it's not like you can tell from underneath a mountain of whipped cream, Mister. 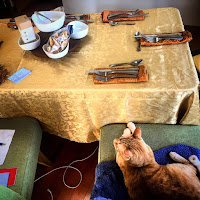 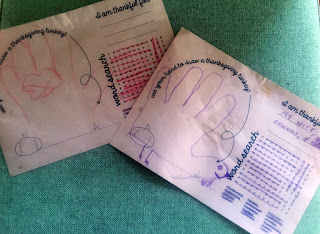 I also got to use our nice table linnens (Bubba couldn't be bothered to care about the love and effort of a nicely set table), and since our Aussie friends are unfamiliar with Thanksgiving, I put together a "kiddie table" placemat to ease everyone into the holiday.  Hand turkeys were weird to explain, but everyone got a big kick out of them once The Mister made an example gobbler. 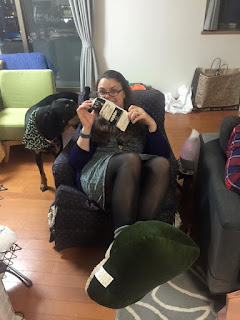 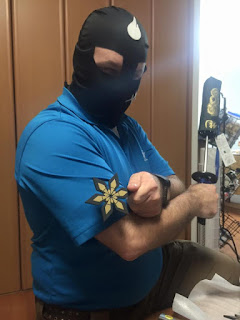 Since this Thanksgiving party was also the last time that all of us were gathered together before Christmas, we also did a fun secret santa exchange.  My secret santa for me a foot warmer (which I have not gone a day without using since... in fact I'm using it right now), and a pencil case shaped like a paint tube.  And the Mister's secret santa (who may have been me), got him a ninja kit, complete with the samurai sword umbrella that he's been coveting for months now. 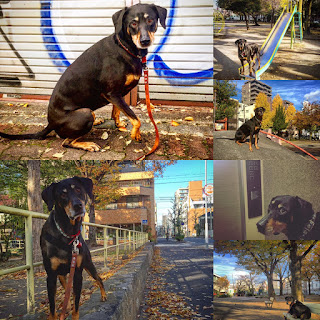 Mac's 7th birthday was this week, and we took a nice long walk with cookies and pictures to celebrate.  Thanks to Facebook's recently implemented "memories" feature, I had a great time going back through the picture of him I've posted every year on that date to celebrate, and pretend that his face wasn't getting a little gray-er.  Gah, he's such a good boy. 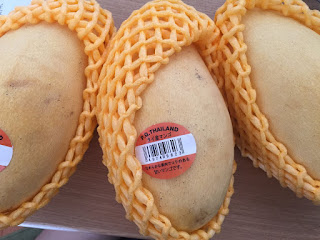 In totally unrelated news, according to the grocery store it's suddenly mango season again.  So... rejoice.  (none of the pictured mangoes survived the past two hours in this house... so goooooood.)