The Mister is in the Navy Reserves.  You may know this already.  If not, you’re likely asking your computer screen a question we have heard about 525,600 times since we announced we were moving to Japan:

Wait, how does he report to his “one weekend a month, two weeks a year” commitment from Japan?

Answer:
The US has naval bases world-wide, and in fact, we (yes, I am using the royal 'we' to imply the US of A) have served as Japan’s naval forces since WWII.  I'll let you guess why.
When The Mister accepted his assignment with his company to send us here, the navy was awesomely easy-going to say he could just complete his weekends at the nearest base in Japan -Yokosuka- which is just a short bullet-train ride away.  So all is well.

The Mister has already completed one of these trips, and was successful, not just in getting to and from the Yokosuka base, but also in bringing me back American Cereal.  Random tangent: Japan doesn’t really do breakfast-specific foods.  They certainly don’t do frosted, flavored, marshmallow infused breakfast in a way that the Kellogg’s corporation would recommend.  What I’m saying is after The Mister’s return I spent a week in a sugar-high courtesy of Froot Loops.  Additional random tangent:  every morning I have finished my bowl of what is essentially soggy skittles in milk and immediately regretted eating them.  Apparently in the few months we’ve been here I managed to *sort of* wean myself off of crappy cereal now?  Only sort of, because every morning I look at what’s left in the box of cereal and pour myself a bowl even though I know it’ll make me feel crappy in about an hour.  That’s probably something I should see someone about.

But back to that “how does an expat assignment work with Reservist commitments” question.  A longer answer comes with the "two weeks" portion (once a year  Reservists go to a base for full two weeks to receive training).  The base here doesn’t usually work with reservists, so there is no training available in Japan.  Thus, The Mister must go to the states for that time.  A time which is… now.

Yes folks.  I am currently hanging out in Japan all by my lonesome.
Which is a really silly sentence to type while I sit in a city of millions.

Partly, it’s disconcerting to not have my daily-dose of an English speaking-partner at the end of every day.  But it’s temporary, and I’m glad we finally got him out the door on this journey.  He had some hiccups with a Japanese zip code having more numbers than an American zip code - the automated system that generates travel orders was not having it.  So it took a few tries to actually get what the Mister needed to be able to shove off on his journey.  He’s excited, and I’m excited for him.

What will I get up to while he’s away?  That’s a great question.  I don’t have actual plans.  I’ve been trying to make some friends of other expats around here, but unfortunately The Mister’s training schedule is over what the Japanese refer to as “Golden Week.”  Golden week is a national holiday, and almost everyone goes on a vacation.  Everyone, it turns out, includes all of my current acquaintances. 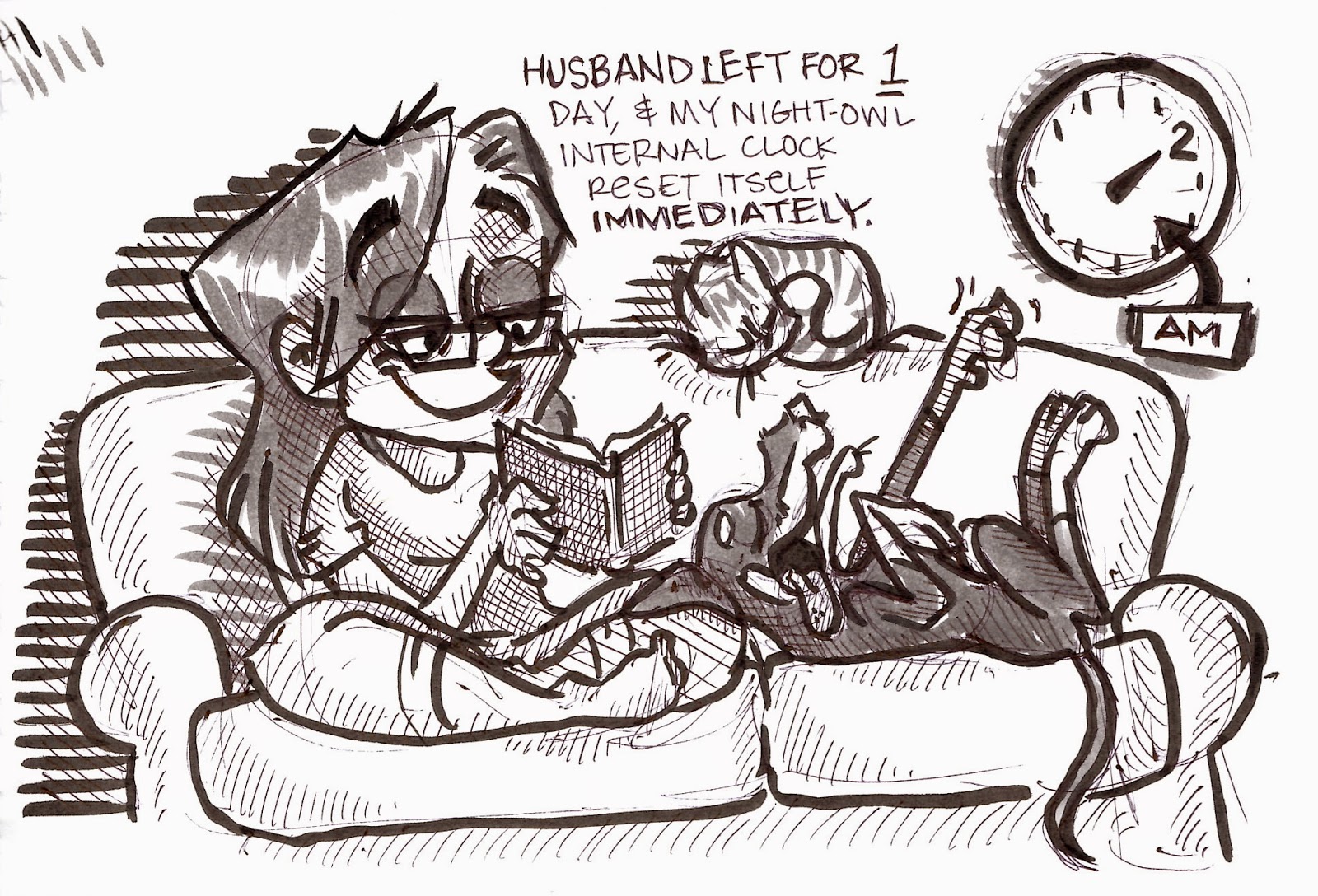 I’M not going anywhere because since Golden Week is a BFD (big flipping deal), plans would have needed to be made literally months ago.  But that’s okay because I also would have had to find something to do with Mac and Bub months ago, and I am honestly sort of looking forward to wandering around this city while it’s a little bit emptier.  Subway rides where my face is not smashed into someone else’s armpit is -honestly, no sarcasm- a fabulously sufficient celebration of Golden Week for this gal.

Also mangoes.  Mangoes are a GREAT way to celebrate everything.  But maybe in moderation.
What would you do on your own, in a foreign country, for 2 whole weeks?
TELL ME IN THE COMMENTS!

Another doodle dump this week friends!
Click a pic to make it bigger! 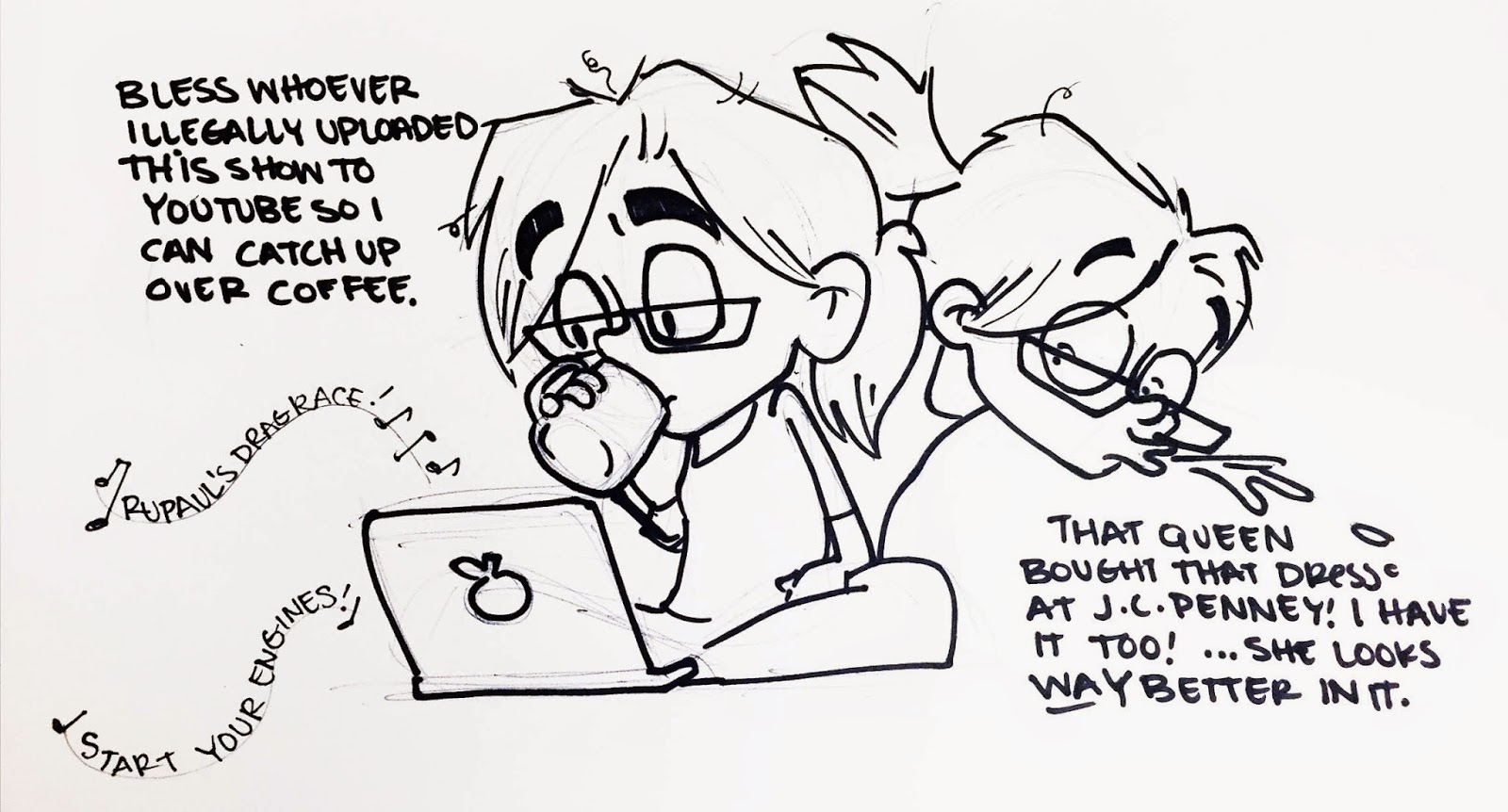 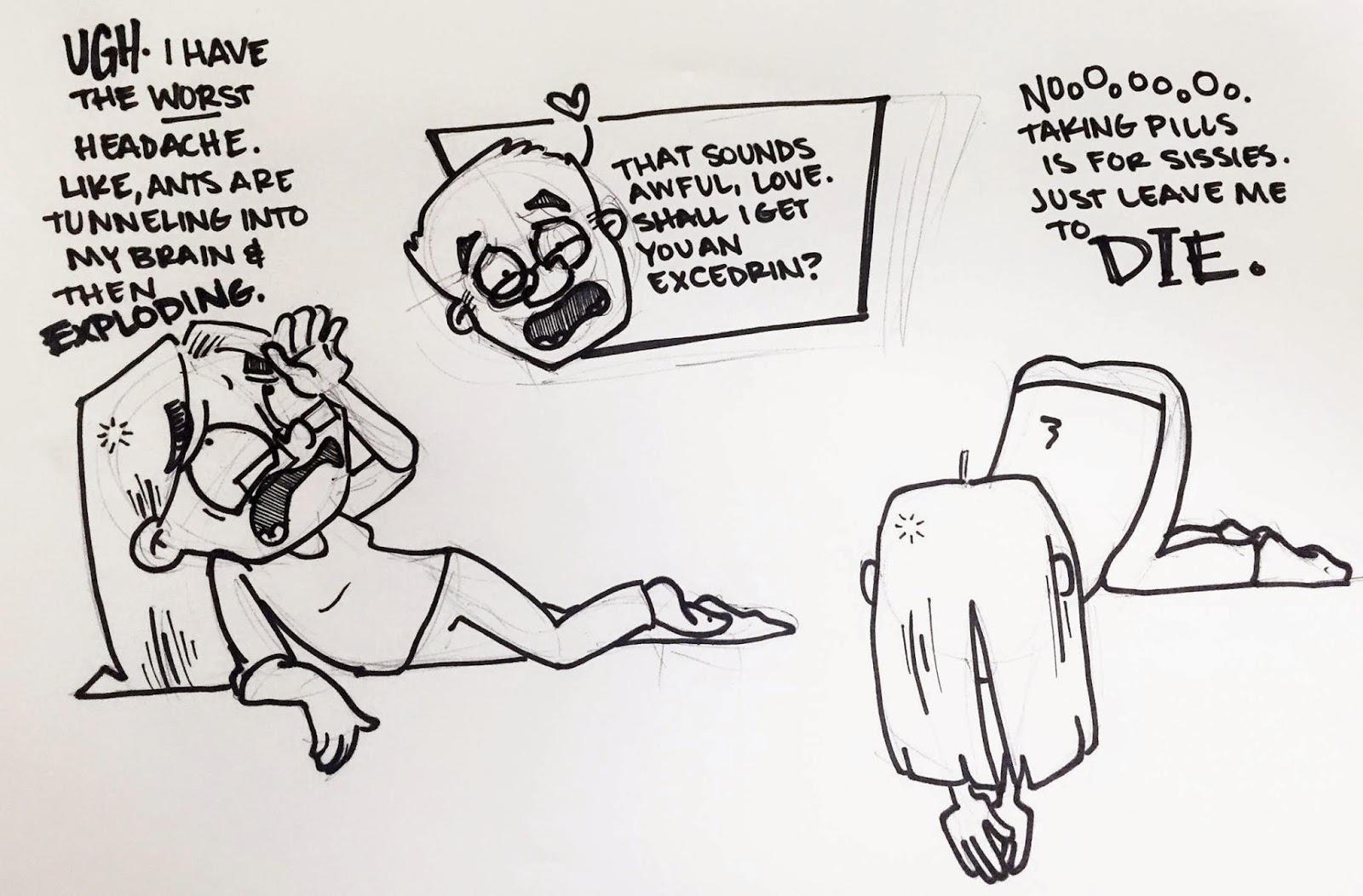 I don't know why, but literally every time i have a headache, I will put off taking an excedrin as long as possible.  I will suffer for hours and when I finally give in it will take mere moments for the pill to crush the exploding ant feeling. 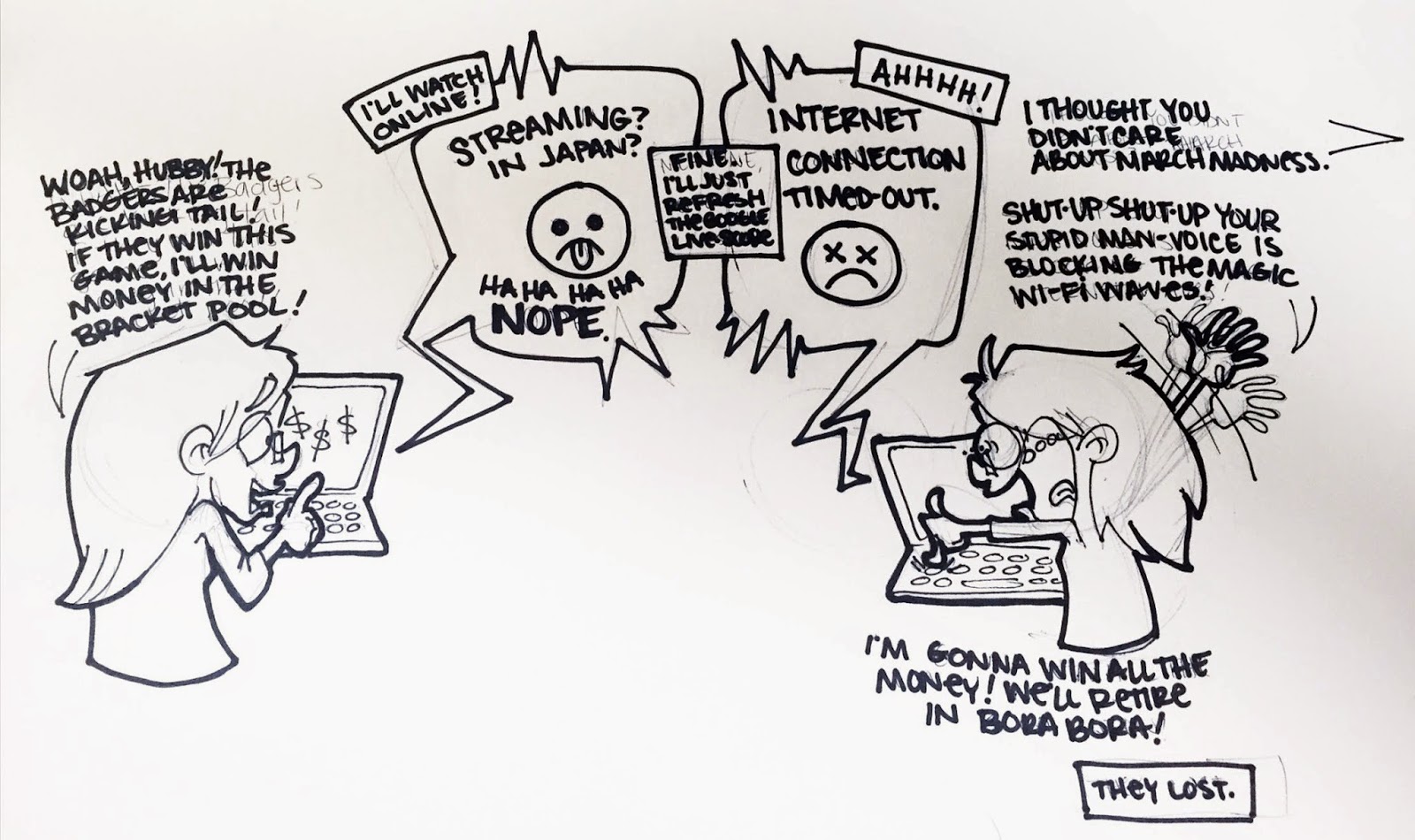 I'm proud of the Badgers - they did so well.  I wish I could have actually watched it.  Stupid wi-fi.

Are you watching RPDR?
Who are you rooting for?
(I haven't decided yet)
Tell me in the comments!

It’s election season in Nagoya.  We know this because: speaker cars.

A speaker car is exactly what it sounds like - a car or van plastered with promotional stickers which is rigged with an external loudspeaker.  This van drives around the major streets while a person in the backseat (almost always a woman with a 'pleasant' voice) reads a two to three sentence statement over and over again into a microphone while politely waving a white-gloved hand out the window  at street-level pedestrians.

All of these vans we’ve seen have people’s names and faces plastered all over them, so The Mister and I have decided they must be toting political “vote for me!” type messages.  Really though, it’s a best guess, because when we hear them, between the garbled-ness of the speaker quality, and the fact that we don’t know enough Japanese… it’s a lot like being kids stuck in a Live-Action production of Peanuts during a scene with a bunch of adults.

I don’t think I’ve ever seen a speaker car in the US - they might exist in larger cities, but honestly I don’t see Americans being too cool with them, so maybe not.  I don’t think they’d fly in the states because they are SUPER loud.  I know they are allowed to start their driving loops at precisely 9:30AM, because I can hear them from blocks away as I sit on the couch in my 11th floor apartment every day.  They go until about 7PM.  All day.  I can hear two of them going while I type this.  I feel like most Americans would be pretty firmly in the camp of “this infringes on my constitutional right to peace and quiet! ‘Murica!”  In fact, I did a brief survey of the Americans that are readily available to me:  100% of the 2 Americans surveyed were totally over the idea of speaker cars.

Growing up in the midwest/ having never lived outside the center-line of North America, I have been brought up to be prepared to deal with exactly one natural disaster:  Tornadoes.  I’m not saying this to insinuate that I would 100% survive a tornado were it to happen, but I feel like I’ve had the time in my 30 years on this earth to amass enough information to take a pretty good crack at said survival.  Great.

Does Japan have tornadoes?
No, so that knowledge is useless.  They have GODZILLA* Earthquakes, and occasionally earthquake related tsunamis.  Two things about which I, KpMcD, have zero knowledge.

(quick note to my parents: I make an effort to write these posts in a humorous fashion.  I have slightly exaggerated here. I am in no immediate danger, calm down.)

We were provided some information upon our arrival regarding Earthquake preparedness, and because I’m a paranoid yutz, I have done some of my own research.  Let me share some highlights: 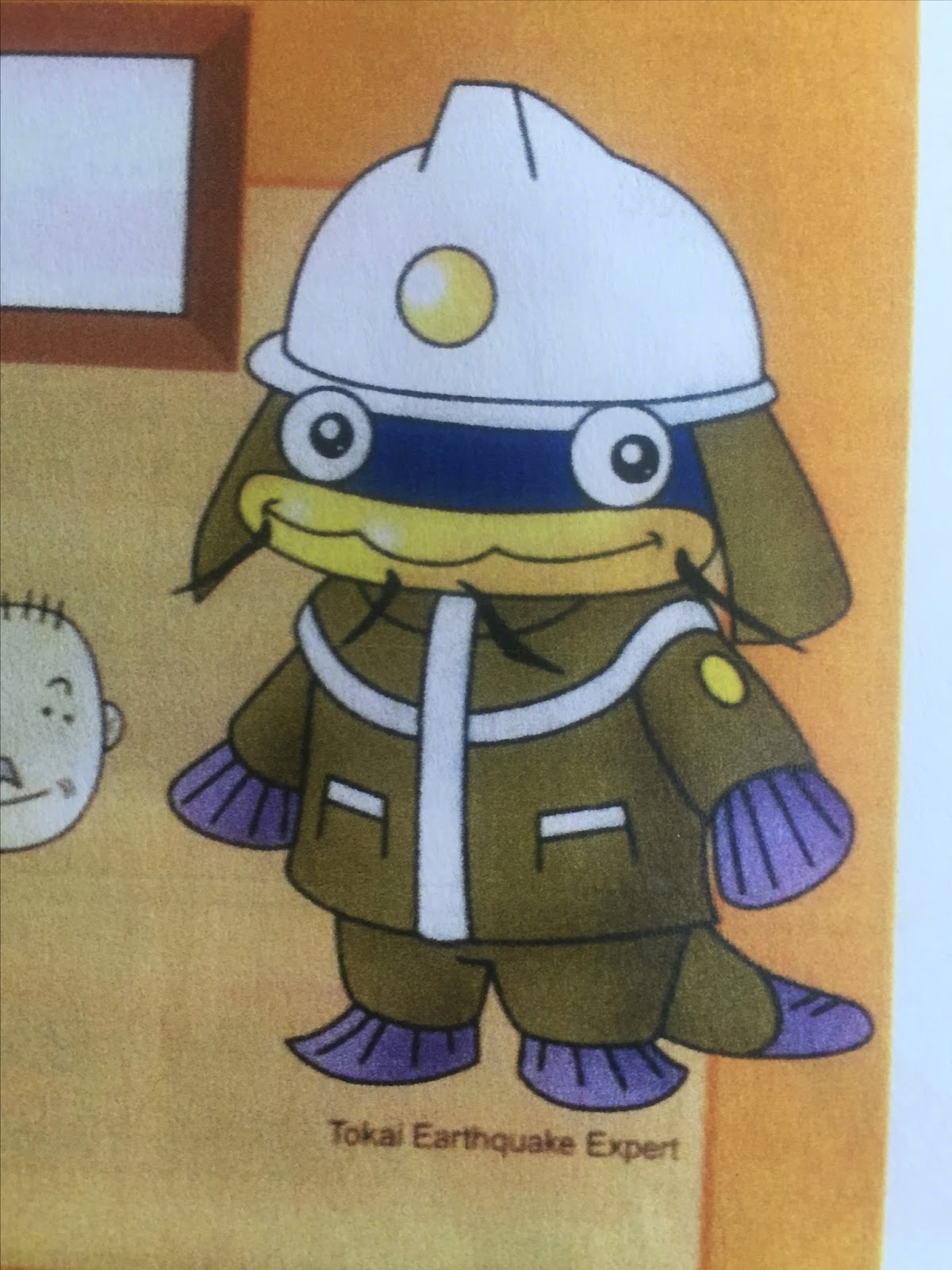 Alright, so I’m feeling informed and reasonably prepared.  How does the monitoring agency and the Tokai-Expert Fish alert people to an impending Earthquake Emergency? 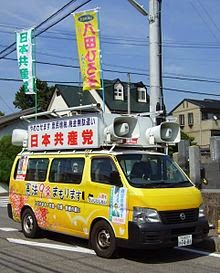 SPEAKER CARS.
Which by sometime next week I will be perfectly conditioned to ignore in a “Boy who cried wolf” fashion.  Perfect.

What type of natural disaster do you prep for in your home-area?
Are you in an Earthquake region?
Did the adorable catfish miss a tip?
Tell me in the comments!

I am a catfish.  There is an earthquake.


*Godzilla is actually called Gojira (ゴジラ）here.
Posted by Kp at 1:09 AM No comments:

We're back in the Tsurumai apartment, and I'm feverishly unpacking things.  While I work on that, have a fun video of Bubba doing one of those weird things that cats do.

Love Peace and Chicken Grease,
KpMcD
Posted by Kp at 10:43 AM No comments: