I'm feeling under the weather today.  Which is particularly notable because the weather outside right now is gross, setting the bar pretty low to begin with.

But it's at least partially my fault,* so I'm trying to suck it up.  I'm failing, but I thought, 'misery loves company,' so here I am to share with y'all.

I heart pumpkins.  Maybe you do too.  I'm one of those people who gets really excited about the coming of "Pumpkin Spice in EVERYTHING" season.  I have a hard time understanding that there are people out in the world who get annoyed by this annual time-period.  It smells so good.  And if you don't wanna eat it, no one's making you.


Or maybe they are?

On the other side of that spectrum, I WANT to eat all the pumpkin spice things.  But I cannot.  Because I am allergic to it.  (except for pumpkin spice coffee, because that only has nutmeg, allspice and cinnamon in it - no actual pumpkin.  So I drink the ever-living snot out of that stuff.)

I haven't always been allergic - As a kid I looked forward to the season of carving jack-o-lanterns and roasting the seeds.  I'd eat more than my fair-share of pumpkin pie (my mum has this killer recipe that uses bisquick so you don't need a crust.).  I'd delight in twirling spaghetti squash onto my fork.

Then one year in my early twenties, I welcomed in the fall just like any other year in my past- I brought an acorn squash home to make dinner.  I ended the evening quarantined in my bathroom.  Which believe me, is the nicest possible way to describe that night.

Thinking it was just a bad squash, I dismissed the incident, and a few nights later I made a box of butternut squash ravioli for din-din.  It ended in an equally horrific fashion as the squash before it (thankfully, the pumpkin spice candle in my bathroom kept anyone else from suffering but me).

Autumn came next year, and I realized that it wasn't from overeating at Thanksgiving dinner that I got a level 5 tummy ache - it was the pumpkin pie.

The year after that, I finished carving my jack-o-lantern and then spent the rest of the night scratching at my arms like a meth addict - anywhere the pumpkin guts had touched my skin was a blotchy, red mess.

And the year after that, The Mister took me out to eat at a VERY fancy restaurant where the chef cooks as a presentation in front of you and teaches you all about the food he's making and where it's from and all sorts of other information you'd find on the bottom of a Snapple cap.
It was set up to be a really romantic evening.  Except the chef there is known to be rather... Gordon Ramsey-ish in spirit, and the first course was a squash soup.  I didn't have the gumption to raise my hand and tell him that I was allergic, so I just ate it.  I ate the whole, delicious, bowl of squash soup. Then I spent the rest of the meal trying to will my body to acknowledge that I was on a fancy date in a fancy dress with a fancily dressed man that I, well, fancied, and not to make a scene.  My body rather loudly opposed my attempts with tummy grumbles and gurgles.  After the meal, the Mister took me home, where we were going to watch a movie.  Instead, he very graciously sat on the living room couch while I sat in the bathroom, pretending that the TV was turned up high enough that he couldn't hear the horror behind the powder-room door.

And so on and so forth.  You'll note that I figured out that first year squashes and I might not be meant to live in harmony, but that didn't stop me from actively deciding to eat squashes anyway.  Even in the face of scaring away true love.  Because pumpkins, man.  They. Are. Delicious.


I feel like Frank the Tank from Old School.
I know it's a bad idea.
A horrible idea.
But it's soooo good, once it hits your lips.

I've come now to the point where I have just decided that there are two times a year where I'm simply going to go for it, enjoy the squashy goodness, and consequences be damned.

The first is when it comes time to carve a pumpkin, because carving a pumpkin is too damn fun for a kid with an art degree to NOT carve a pumpkin.  Also because along with carving a pumpkin comes the roasting of pumpkin seeds.  Those are super yummy on the way down, and make up for my pumpkin-gut-covered arms being itchy.  Pumpkin seeds on the way up, not so much yummy, but who's keeping score?  Thus, yes, I carve and eat a pumpkin once annually.

The second is Thanksgiving dinner.  Because - and this is not a healthy way to look at it, I am WELL aware so thanks for not commenting on it - I figure if there's going to be an ahem, "evacuation" after I eat a slice of delicious pumpkin pie, why not capitalize on that opportunity by eating that slice directly after I have devoured an astoundingly dense thanksgiving dinner and skip having to count those 3,000+ calories?

I know it's not "logical."  I become so immediately ill that it is CLEARLY a poor choice.  (Did you catch that in the post title? Ill-Logical?  Ha.  I slay me.)  But is every choice you make in your best interest?

Do you ever choose to do something you know is
NOT good for you?
Tell me in the comments! 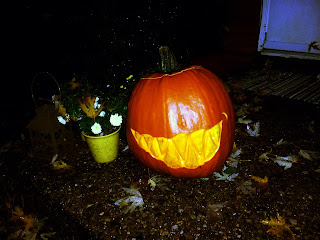 So it is that today I'm sitting on the couch, hoping that my stomach stops doing a floor routine sometime soon.  Last night I carved my pumpkin while the trick or treaters braved the rain.  At least I don't work in the office on Fridays*, so I don't have to be anywhere and look/ act like a decent human being.  I did have to venture out to the grocery store though, as we ran out of toilet paper somewhere around 3AM last night.

In related news, The Mister requested a shark themed jack-o-lantern.  I opted for a more subtle nod in that direction.  (you can click on the picture to make that toothy grin a little bigger.)

In conclusion? Worth it.

*I think I've mentioned it before here, but I've been working at a preschool since mid-summer.  The kids are fun and keep you on your toes, and I work in the administration, specifically making sure the branding and publicity for the school is polished and consistent, so I'm working in my wheel-house.  But the downside is that toddlers make for rather cute harbingers of the plague.  While I'm sure that some of my Ick-Feeling is from my pumpkin carving escapades last night, some of that is also that the little germ-mongers finally succeeded in passing something on to me.
Posted by Kp at 6:56 PM 5 comments: