I would pay someone a million dollars right about now to ship me a gallon of NyQuil and/or DayQuil. Unfortunately I'm pretty sure that shipping drugs across the border is illegal, and by the time it reaches me, I will have either succumbed to the stress plague altogether, or I'll have gotten better and resumed my usual daily crafty business.

All that said... seriously Mexico get with the program. Why don't you sell NyQuil? It's the bees knees when it comes to debilitating colds/plagues. Robitussin is just not pulling it's weight.

...The little Vick's Vapor Rub inhaler is pretty bomb tho. 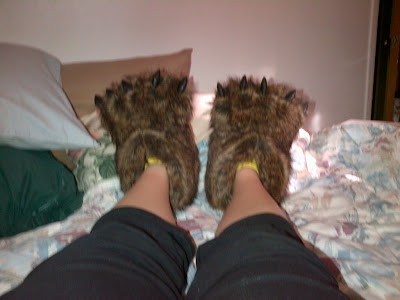 I guess I'll just have to console my snotty self with my awesome new bear slippers.
A Beary Merry Christmas courtesy of Fiance's Ma and Pa

So I'm sure you've caught the gist, but Fiance and I are back in Mexico after what we dubbed "The 2011 Whirlwind Midwest Tour." Nine days straight of getting up early, chugging some coffee, and then hopping in a car for at least an hour or more (or if you're making the Detroit to Green Bay trip... NINE hours) to see assorted friends and family, hanging out until the wee hours of the morning, then going to bed so we could repeat the process in a matter of hours. I wouldn't have traded that time for anything, and I am so happy to have seen everyone we did (and if we missed you, I'm so sorry, but I promise we waved as we drove by whatever portion of the midwest you are in).

What I would trade, however, is my body's inability to handle that kind of trip. I don't know how Fiance managed the whole thing so well, but on the morning of day 9 (aka the day we got up early to get on the return plane), I woke up feeling like I was just scraped off the bottom of a shoe. I guess I just can't be that kind of traveler.

Do you get sick from pushing yourself too hard for too long?
Any good "I got sick" stories to gross out my readership in the comments*?

I could have guessed before the trip that I'd end up sick after it was all said and done (in fact, I did guess - I scheduled the pets to be at the border an extra day just so I had down time), but I didn't guess that when your nose is 100% plugged, your ears can't pop in a plane because there's nowhere for the pressure to escape to.

If I can back-track for a moment, that plane ride should have been AWESOME. Monterrey is a very industrial city, so most of the plane traffic in and out is for business. Since most businesses shut -or slow- down significantly between Christmas and New Years, our flight had a grand total of 9 people on it. And THAT meant our very awesome pilot could approve each and every one of us a free upgrade to first class... and still have seats open between us. I can't say I didn't enjoy my complementary cookie. God I love those cookies. Really I love any cookie. But a plane cookie is just better because... it's been in a plane.

Then we got to the mountains, and started descending, and my ears couldn't pop, and all that pressure built up into such a horrific amount of pain that all I could do was sit in my seat with the tray in the upright and locked position with the seat belt securely buckled and cry while Fiance tried with all his might to soothe me. That's about when he tried to say something comforting and I realized that all the built up pressure sitting in my head effectively MADE ME DEAF. Which freaked me right the hell out and so I cried harder. What if it's permanent? What if even if my hearing returns but I have damaged it and I can't hear certain things well, or if I will always have a weird ringing in my ear?

Has anyone else had this experience? Good lord what did you do?

So that was fun. In case you were worried - judging by how well I heard each and every firework set off in the greater metropolitan area of Monterrey yesterday night while trying to sleep in a Robitussin induced stupor- I'd say my hearing has been restored just fine. Oo-Di-Lali, golly what a day.

The next day in all my snot monster glory, we traversed out to the place that was taking care of Mac and Bub for us. Mac seemed to have had a good time, and slept off his time playing with the other puppies for the remainder of the afternoon. Bubba, on the other hand, played his Bubba the brat card and refused to eat anything while we were in the states. He's definitely lost his Garfield physique, but I would guess by how quickly he stuffed his snout into his food dish upon returning to the house, he should be back to normal in no time. 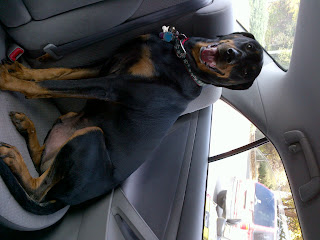 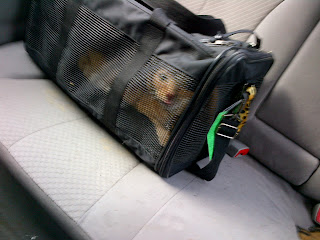 As usual, Mac was super pumped for the car ride home.
And as usual, Bub was... less than pleased.

As he's busy stuffing his face right now, I'll take this opportunity to gloat a bit about Bubba's loyal dedication to his 'Cat Contract.'

I love pets (obviously). They make my heart happy, keep me company, and apparently they lower my blood pressure. But Mac and Bubba fulfill very different roles in this family. Mac's my jester, my entertainment, and a big part of my self-confidence in braving new situations (like when the doorbell rings and I wasn't expecting anyone). Bubba has basically 2 bullet points to his job description:
In the last few days he's doing so well with bullet number two, that this morning I woke up and realized he snuggled my breathe-right strip right off my nose sometime during the night. And stuck it to his side for safe keeping. I'm on my way to bounce back from this plague I think. I've moved on from both nostrils being plugged, to day-long migraine headache, aaaand by tomorrow I should have stepped soundly into the death rattle cough. You know you're a creature of habit when even your illnesses are this predictable.

Oh would you look at that, it's time for another swig of the 'tussin.
Stay tuned friends - later this week I hope to tackle some fun topics, including:
Just try to contain your excitement!

*I'll start. This one time, when I was little, there was a pier that my dad had worked on in Door County and we were going to the opening. It was a long drive (for a kid anyway - really it's only an hour or so), and I wasn't feeling well when we arrived. Pops thought it might help to give me a piggy back ride so I would stop whining about walking around. And as I'm sure you probably predicted by now, I totally ralphed on him. Yay. Your turn!

Yes. I have experienced the hell that is plane sickness. In fact, I experienced it for 14 hours on the flight from Brisbane back to LAX. The woman next to me was so frustrated with my coughing that she kept giving me her bottles of water. And the landing was the WORST. Oh the pain. I cringe just thinking about it.

Go get a nettipot at the pharmacia. They are the most unsexy things, and it might hurt the first time you do it, but it WILL be worth it. Promise.

good lord. 4 hours was more than enough airborne ick for me. Also. this nettipot business. it HURTS the first time you use it? How does pouring water up your nose hurt? Also also. Everything in the pharmacies here is kept behind the counter. How to ask for a nettipot in spanish... hm.