This is Not a Drill - Hanami is Upon Us.

Last week Mac and I walked to the park and we were met at the entrance by a row of food trucks and a man juggling swords while balanced upon a unicycle.

I turned to Mac for my best Rafiki impression:  IT IS TIME. 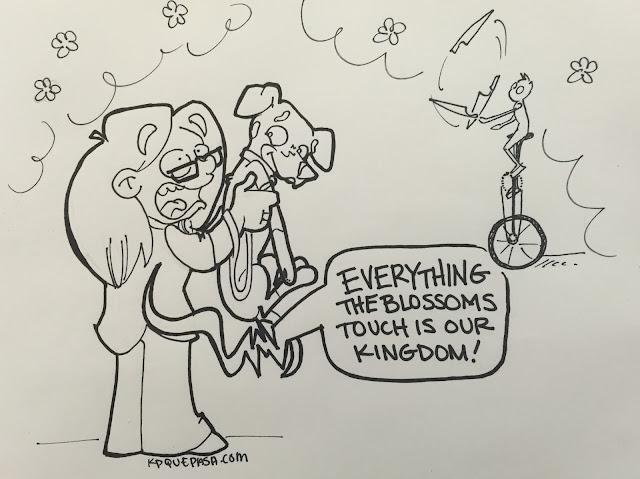 Hanami season is upon us!  For the un-indoctrinated, Hanami/ 花見  means "flower viewing,” and it is one of the most popular celebrations in Japan.  Hanami celebrates the blossoming of the cherry trees (sakura/ 桜) throughout Japan, and it is celebrated by simply taking a tarp out into the park, finding a spot under a cherry tree in bloom, then settling in to enjoy the out-of-doors while drinking.

As I mentioned a few weeks ago, immediately following Valentine’s Day, stores everywhere dedicate whole sections of their shop to everything pink and flowered.  Starbucks has a Sakura Frappuchino (though they only run the special through the 15th of March, which is before any of the trees start blooming and I fail to see the point in that…#marketingFAIL), KitKat puts out a Sakura KitKat for the month, and Mac?  Well, Mac gets a new bandana.*  So were were ready for the celebration, is what I’m saying here. 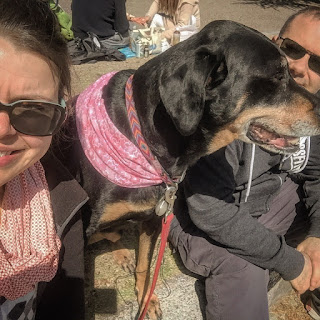 The bigger parks in the area which have cherry trees also set up the park during these times like a festival site; lots of food trucks, and beer tents, and random entertainment (see above re: juggler on a unicycle because I was 100% not making that up)

Last year, we didn’t get much of a chance to celebrate Hanami, and I didn’t talk about it on the blog much, because we were still trying to get our house fixed and unpacked and moved back into it from Okazaki.  So I’ve been really soaking up the sunshine this past week over in the park.

Who am I kidding: forget sunshine, I’m soaking up the kebabs. 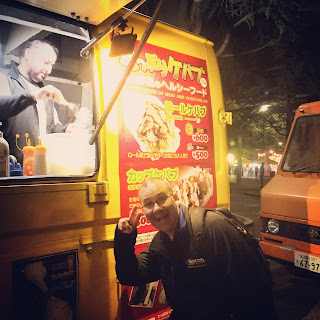 The Mister and I have a deep love for Turkish Kebabs.  Judging by the number of Turkish Kebab shops in the area, we’re not alone.  But during the Hanami celebration, there is a Turkish Kebab truck right in the park.  It’s as close to delivery Turkish Kebabs that we could get.  And the Turkish man who owns that Kebab truck, adores Mac.  So the first time we did a lap through the food truck court to figure out a snack, he waved us over and promptly threw Mac some chicken.

It was pretty much over for us after that.  What I’m saying here is that we have had Kebabs at least once every day this past week, and there always seems to be  a little container of meat that the kebab man had saved for Mac on those occasions.  I’m pretty confident at this point that I could close my eyes once I got to the park and Mac would just drag me straight to the Turkish Kebab Truck.  I supposed there are certainly worse things my dog could be taught.

What’s your favorite food-truck dish?
Tell me in the comments!

Sort of related note:  I’ll be getting to a few more Hanami gatherings in the next couple of weeks bringing FREE SAMPLES of KitchenQuePasa Hanami Cookies with me - so if you see me out and about, don’t hesitate to flag me down.  Specifically, I'll be at the Nagoya Adventure Club's Hanami Party this Saturday with Pink Grapefruit Meltaways and Mint-Chocolate Wafers

Speaking of, I’ve got some cookies to bake, aaaaaand then it’s probably time for a kebab. 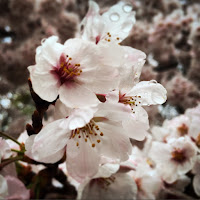 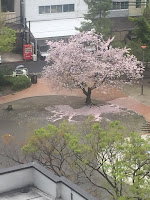 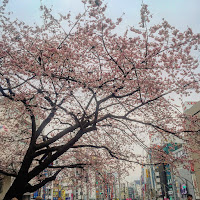 *Mac almost always wears a bandana when we’re out in Nagoya, because I have found that people interpret dressing you dog up as a sign that your dog is not vicious and terrifying.  So… bandana.
Posted by Kp at 4:46 AM