Multiple Things With no Discernible Segues.

We survived the #phoon!

Which is mostly due to the fact that #phoon hit land way west of us, so mostly we just had some wind and a bit of rain.  Don't worry though, there's another one headed toward Japan as I type, and as I've been told on many occasions for many different Japan-related things: It gets worse!*
So... at least eventually that will be an interesting blog post.

*STOP SAYING THAT!  IT HELPS NO ONE AND MAKES ME QUESTION WHATEVER FRIENDSHIP WE HAVE DEVELOPED.

At the grocery store yesterday, I was picking out some pork, when an older woman started waving in my direction.  I looked behind me, as if she was trying to get the attention of the pig meat back there.  When I determined she was, in fact, trying to get my attention, I quickly walked to her to see what was up.  The elderly are revered here, and as a member of the community it is everyone's responsibility to help them where possible.  I thought maybe, because I am a tall American, she might need help getting something off the shelf she was next to.  So I said hello, and asked if she was okay. 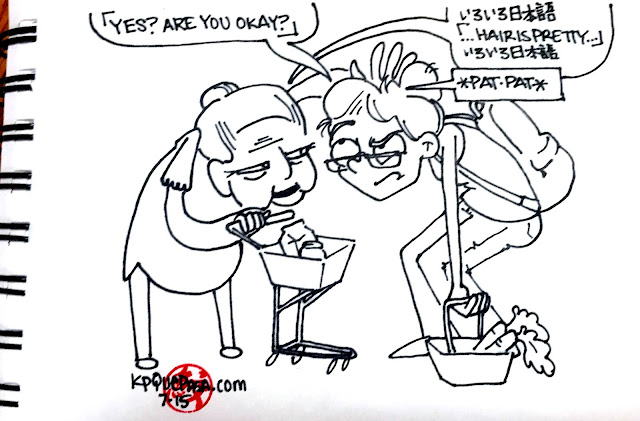 She motioned for me to come closer.  When I bent down, she pet my head and told me I had pretty hair.  Afterwhich she smiled, turned, and wandered away.

I... don't know how to respond to this.  I know she meant it as a compliment.  I know that.  But I can't help but feel that she treated me as one would a cute dog, patting me on the head and then moving along.  I am a human being, and no matter what culture you are a part of, invading a stranger's personal space to condescendingly pat them like a pet is flat rude.  Just because I don't speak YOUR language doesn't mean that I have the intelligence of a puppy, so I would ask not to be treated as one.


I don't know.
What would YOU do if someone
randomly pet you like a dog?
Tell me in the comments!

The cicadas have emerged!  If you aren't familiar with cicadas, they are large, loud bugs that live dormant underground for years and years and then somehow sync themselves with all the other cicadas doing the same to emerge from the ground at the same time, shed their underground skin, climb into the trees, and then sing until they find their mate and... well then they die.
For as loud as they are, I find them pretty fascinating.

That video is the park near our house - the scratchy noise in the background IS THE CIDACAS, and it's deafening.  There's also the shells of the ground-stage of Cicada in that clip.  They climb up a tree then split down the back to come out and transform into these beautiful creatures:


Something about big bugs makes me more intrigued than squicked out.  I think maybe it's because they're easy to spot and generally slower.  Cicadas don't bite, they won't harm me.  Samurai beetles are another great example - they're so COOL to me.  But if it has more than 6 legs, or it's fast (like roaches, centipedes or spiders), it's a big serving of Nope with a side of Nope-sauce.

What are your feelings on bugs?  Yay or nay? Tell me in the comments!

There is, however, a unique phenomenon that I've experienced in regard to Cicadas that I'm a bit over:  The Semi Bakugan ( 蝉爆弾 ), or "Cidaca Bomb."  That's when you find a Cicada on it's backside on the sidewalk.  You think "oh, it must have mated and died already."  And then it momentarily buzzes to life, making an almighty racket and scuttling over a few inches by flapping it's wings against the pavement.  And because you expected it was dead, it startles the hell out of you. 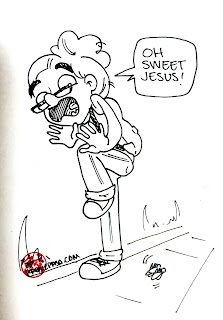 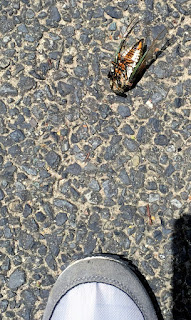 Last anecdotal thing for today?
I THREW OUT MY BACK.
How, you may ask?

I was sitting in a chair.  And I leaned forward to grab a pencil on the table in front of me, and then the spine gnomes thrust a white-hot poker into the lower left of my spine.

Okay, so more likely that small lean was just the straw that broke the camel's back, and what actually trigged it was my decision to not take a cab home from the pet store after buying a 40 pound bag of dog food.  I ended up hailing one when it started to rain on my walk, but I'd already made it half-way home.  In any case, I've never thrown my back out before, but I can tell you if you ever manage to do such a thing, you will know INSTANTLY that it is exactly what's happened to you.


Have you ever thrown out your back?
Was it a more harrowing story than mine?
Tell me in the comments!
(also if you have any tips for getting back on your feel that aren't already listed... hook a sister up.)

Thankfully for me, The Mister has been good with fetching me ice packs and helping me get out of chairs as if I was a broken 90 year old woman.  And the critters are, of course, are happy to practice their craft as professional cuddle aids.  So I should be back up and running soonish.