What happened to last week's blog post you ask?

I was in Japan.

The Mister and I took our exploratory trip this past week - we found our housing, tried our hand at speaking the lingo and navigating the train system, and tried so much of the food.  I think I speak for both of us when I say that we're feeling pretty great about this move at this point.  Ducks seem to be in a row.

Of course, there's a ton to talk about now, but if I smash it all into one real long blog post, 1. you'll get bored reading a wall of text, and 2. I won't have anything fun to talk about next week.  We're gonna break this trip up a bit.  First topic of choice? JET LAG.

I've never had jet lag before.  Maybe you have.  Going to a place with a 13-14 hour time difference (depends on day light savings) means that I didn't just have my first encounter with jet lag, I got sucker punched by it.  I was prepared for the tired, but jeepers, I was not prepared for just how my body would react to that tired.

Have you ever had jet lag?
How did you cope? Tell me in the comments!

It hits you in waves - you'll wake up at like, 3am, totally unable to fall back asleep, so you toss and turn or just say "eff it" (or something close to that) and get up.  Then somewhere around 3pm you get SO tired you would actually (honestly not exaggerating) rather suffer some mortal wound than keep going.
If you don't fight through both of those waves, it just drags the adjustment period out longer.  So that's been fun.  Here's some great jet lag highlights for you (I need you to know I think all of these things are sort of hilarious now):

By most accounts, it takes approximately 1 week to reasonably adjust to US-Japan Jet Lag.  The crappy thing about taking 1 week to get all our living arrangements straightened in Japan means that we got ourselves adjusted to Japan-time, then immediately got on a plane and go through jet lag in reverse.  I'm going on day 12 of feeling like I'm hovering between passing out and barfing at any given point.

Our first day in Japan we made a point to stay up until 10-11PM, Japan time, per recommendations of our well traveled friends.  This effectively means that we were awake for over 24 hours straight.  We were tired but felt fine otherwise.  I then woke up, WIDE awake, at 4AM, and couldn't convince my body to go back to sleep (this is weird for me, usually I display borderline narcoleptic traits in my sleeping habits.  I can ALWAYS sleep...).  I debated taking a sleep aid -which The Mister and I have been popping like tic-tacs as of late- but then I would have been groggy 3 hours later when I actually needed to get up and be coherent in not-my-native-language.

Our third day in Japan I was so legitimately tired at 8PM that I uncontrollably and spontaneously burst into tears when The Mister tried to give me a kiss because it meant he was standing in-between me and the bed I was desperate to crawl into.

He was trying to give me a kiss because, as it turns out, The Mister and I are TERRIBLE people to each other when we are over-tired (though I will be the first to admit that I am loads worse than he is), and he was trying to smooth over a meaningless snap from hours earlier that I refused to let go of, like a 5 year old.  Knowing this about ourselves helps, but sucks pretty hard nonetheless.

We got into a fantastic (in hindsight, at the time it was less fantastic and more wretched) nothing fight at the furniture rental place because -as we later realized- we were both too tired to give any poops about the furniture we were picking out to furnish the home we picked... so we were both trying to make ourselves be hyper-careful about our choices to combat our apathy.
So we fought about literally the most insignificant thing that neither of us actually cares about but neither of us was willing to budge at the time and to that effect I'm very glad that Japanese doesn't have any translation for English swears.

When you are on the return flight coming east, you are recommended to sleep as much as you can.  But the plane we were on had little TVs (with GAMES and MOVIES!) in the seat-back of every chair, and since we had adjusted to it being 10AM Japan-time when we got on the plane... I slept mostly not at all.  But I did get very good at Soduku after playing 12 hours of it.

Of course, that meant when our plane back to the states landed at 11AM EST, I felt like it was midnight, my body was beyond confused, and I immediately went to bed.  For 23 hours.  This is not recommended, because you know what happens then? 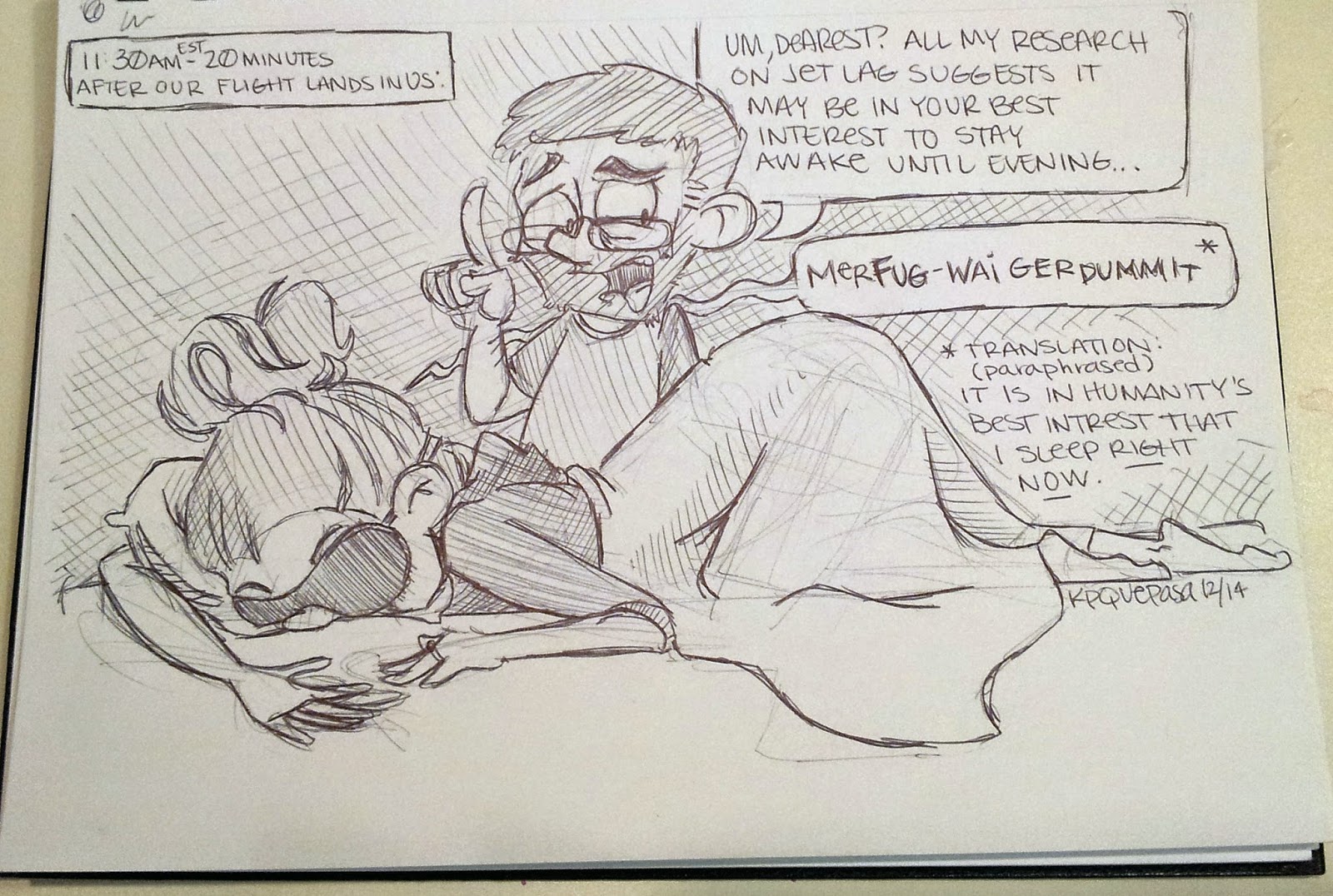 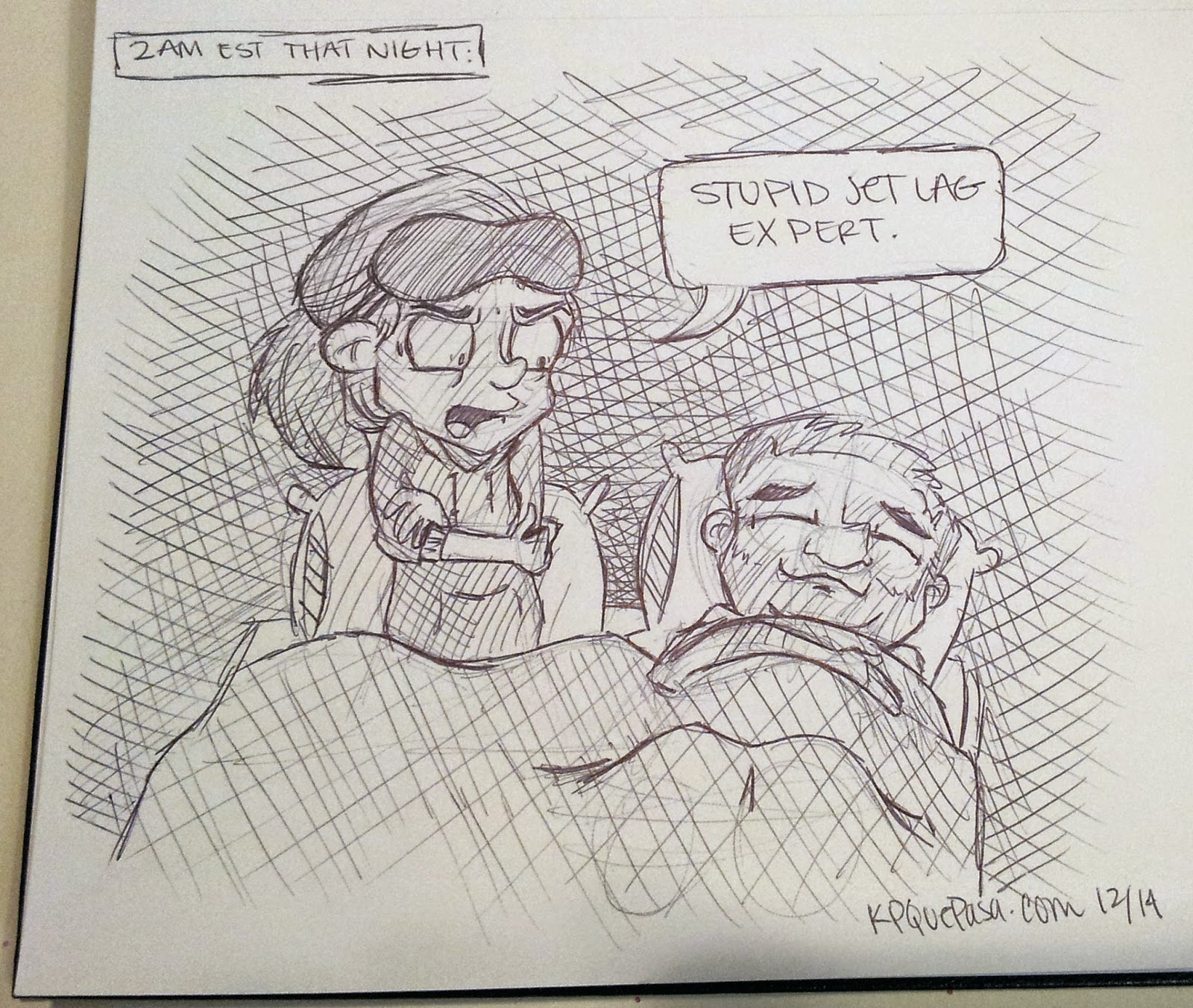 YOU MAKE IT SO MUCH WORSE.  Blargh.  But it felt good at the time.  Until I dropped one of our suitcases on my foot because I was feeling both rushed and incoherently tired.  That is not recommended, either.

At the end of that 23 hours, we took our Japanese language proficiency exam.  You know, the one we've been exclusively studying for throughout the past 7 months.  What I'm saying here is that there was a lot of coffee involved just to make sure I stayed awake.  I also discovered that I became super judgmental of everyone around me at that point of the lag.  This will be another post, because as it was a standardized test, I was in a room with 21 other people to judge mercilessly for 4 hours... and that left me with a lot of random writing ammo.

That level of tired makes you ridiculously forgetful (let's hope that was not reflected in my test score)  Great example?  I went grocery shopping yesterday and was so fixed on making sure I remembered to pay for the groceries that I forgot to then take the groceries I bought with me when I left.  They chased me out of the store with my cartful.

Me and my friends visited japan last summer and we had the best time of our lives and thats with the help of JetLagFX http://www.jetlagfx.com/.