The First (of many, let’s be real) OMIGAWD I’m Moving to Japan Freakout.

The Mister works at a company that is based out of Japan.  It is the reason we will be moving there at the beginning of the year.  It also means that at any given branch of the company (like the one here in Michigan, USA), there are many native Japanese folks fulfilling their own expatriate assignments.

A week or so ago, one of The Mister’s Japanese cohorts asked if I knew how to make pumpkin pie. He had heard about the American custom of pumpkin pies, and he wanted to try it. The Mister gleefully offered to ask me to bake a pie, and about three minutes later, suddenly there was a whole dinner party planned around the fact that I would be baking two pies for some of our Japanese guests.  They were excited, I was all like “heh, yeah, no pressure or anything, just representing my American heritage with this PIE.”

But I do really like to bake, and so pies were made and everyone got to try it, and everyone either really enjoyed them or they’re super good at feigning delight (I’m okay with either so long as the illusion remains unshattered).

And then another exec got wind of this pie party and was bummed that he didn’t get to have any pie.  So this same exec asked if I would bake pies again, for him.  And so I did.  Again, it seemed to go over well, but my recipe makes two pies and with only The Mister, myself, and the exec eating one slice a piece, there was a lot of pie left over after that one. (halving a recipe is for sissies.)

As much as I would love to just tuck into an entire pie myself, I brought the remaining pie and a half to my Japanese lesson at the company the next day.  My willpower is crap y’all, if it would have stayed in the house any longer… well it wouldn’t have existed by the time The Mister came home from work 5 hours later.

As we chatted over pie before the lesson began, our tutor calmly informed me:

“get your baking in now - they don’t have ovens in Japanese homes.  you’ll be using a toaster oven and a rice cooker exclusively for the next few years.”

...
I got home and 'kind of' lost my mind.  It’s not like I bake every day, but I really LIKE how creative and silly you can get in baking.

Thus, I’d like to think, if my blog ever became adapted for the silver screen (because, of course it would be), this would be the point where we, the audience, see a montage of me frantically pinning recipes of “How to Make Cake in a Rice Cooker” and “Fantastic Toaster Oven Cookies!” all afternoon, to a track of the "Cooking By The Book" remix with Lil Jon. 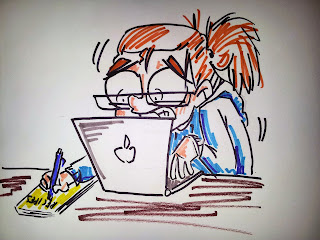 The Mister came home from work/ not knowing I had fixated on this statement about Japanese Oven Deficiency, to see a crazed me, hunched over my laptop, hair everywhere, makeup smeared, all “It’s all gonna be okay. I think I can still make a Christmas Cake*”

Instead of backing out of the room (like any reasonable person would be wont to do), The Mister had some sort of inspired lightbulb turn on upstairs, and he responded with “hey, there’s a bake sale at work on Friday.  I told them you would make cookies.**”

So today is cookie day.  I will bake all the cookies.  ALL OF THEM.  I shall not only feed my love of baking, but also I get to use my absurd collection of weird cookie cutters.  Which always makes me a little happier.

Hopefully this can clear the way for me to move on to the next insignificant thing I can freak out about. 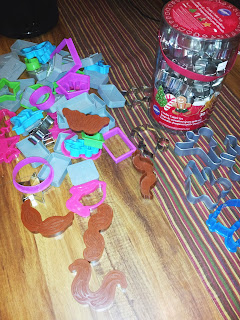 This is only some of my strange cookie cutter collection.
The weirder the better.  The mustaches are totes my faves.

Yay cultural differences. A necessary  awesomeness.  But they do take time for me. 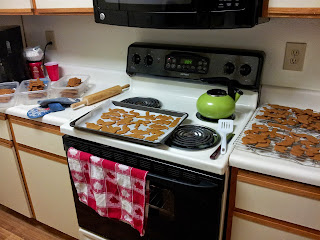 Have you ever let a little thing get to you like that?
Tell me in the comments!

*Christmas Cake - Here’s what I’ve taken away from some discussions with our tutor:  In Japan, Christmas is more of a couple’s holiday, and many folks celebrate it by eating cake.  The day AFTER Christmas (the 26th), these cakes become wildly discounted at the bakeries that make them in their beautiful industrial ovens that are apparently the only ovens in the whole country and - *breathe* I’m getting off track.
Anyway, this discounted cake has become a slang term in Japan; women who are still unmarried at 26 are often referred to as “Christmas Cake.”

…therefore - for the record, I am a Christmas Cake.  so there’s that.

**I am 100% positive The Mister did not tell anyone I would be making cookies, and said this to placate me.  But again, let’s keep the illusion alive for my feeble benefit!  Horray!  There is still a bake sale, and there is still a good cause behind it.  So cookies it is.  SO MANY COOKIES.
Posted by Kp at 8:55 PM

I really, really, really want those mustache cutters! How cute! I wish you the best of luck in Japan. Sounds like quite the adventure!

Kristin! The cookies are crazy cute. Also moving to the Netherlands where I too have not had anything that even resembles an oven (and a few attempts at baking in a "combi" oven failed miserably), have turned strictly to no-bake desserts. THERE ARE MORE THAN YOU THINK.

My favorite creation is something I like to call the arctic turtle: almond/peanut butter "cups" that look like squidge-y turtles + ice cream (the arctic element). You are extremely creative - I look forward to hearing about your creations.